Theodore Roosevelt once wrote, “To lose the chance to see frigatebirds soaring in circles above the storm, or a file of pelicans winging their way homeward across the crimson afterglow of the sunset, or a myriad tern flashing in the bright light of midday as they hover in a shifting maze above the beach -- why, the loss is like the loss of a gallery of the masterpieces of the artists of old time."

As president, Theodore Roosevelt created 51 Federal Bird Reserves to protect birds from poachers who sold feathers to decorate fancy hats. The plume trade brought some bird species, such as great egrets, close to extinction. This slaughter of birds for useless fashion sparked outrage across the country and led to the passing of the Migratory Bird Treaty Act (MBTA) of 1918. This act enforced a treaty between the U.S. and Great Britain (who controlled Canada at the time) which protected migratory birds throughout their range and banned commerce in their parts.

Since Theodore Roosevelt’s time, migratory birds have faced many new threats. In the 1970s, the Department of Justice (DOJ) updated the MBTA to cover companies who incidentally killed protected birds as a result of poor management practices. These incidental kills can be caused by a wide variety of structures, such as gas flares, wind turbines, power lines, and oil pits. The DOJ released public statements that stated they would work with companies to correct violations and only prosecute companies who “ignore, deny, or refuse to comply” with best management practices to avoid preventable bird deaths.

One high-profile example of a successful prosecution was the 2010 Deepwater Horizon oil spill. BP pleaded guilty to violating the MBTA and agreed to pay $100 million to restore polluted wetlands. Another case happened in 2013, where Duke Energy Renewables pleaded guilty for incidentally killing 163 migratory birds, including 14 golden eagles, at Wyoming wind farms. Seeking to avoid accountability for environmental crimes, powerful companies have lobbied to roll back the MBTA. The Trump Administration has been listening and is trying to undermine the MBTA by removing penalties for companies who negligently cause unnecessary, preventable bird deaths. If they get their way, it will remove all penalties for incidentally killing protected birds. This would turn the law into an antique which can only protect birds from poachers.

This rollback is a gift to dirty industries that put their pocketbooks ahead of the public. The rollback is based on a legal opinion written by Daniel Jorjani, a former advisor to Charles Koch, who now works as the principal deputy solicitor for the Department of the Interior. A U.S. Fish & Wildlife Service (USFWS) press release on the reinterpretation included 28 favorable statements supporting the rollback, including praise from the American Energy Alliance, National Mining Association, National Association of Home Builders, National Ocean Industries Association, and other anti-environmentalist groups. No statements from the numerous organizations opposing the rollback were included.

Oil pits kill birds when they confuse them for ponds and try to land near them. The birds get stuck in the waste pits and die a slow, painful death. These deaths are easily preventable with pit coverings. Trump’s rollback of the MBTA would remove any responsibility for oil companies to prevent them.

Trump’s supposed concern for avian life is sharply contrasted by his anti-environmental policies. His administration has tried to remove greater sage grouse protections to expand oil drilling on public land. Trump tried to open 98% of American federal waters to offshore oil drilling while simultaneously removing safety regulations designed to prevent oil spills. The Trump Administration is trying to lease the Arctic National Wildlife Refuge to oil drilling, threatening migratory birds from seven continents. A comparison of Trump’s rhetoric about bird conservation and his actual environmental policies creates the impression that his concern for avian life begins and ends with wind turbines. The rollback of the MBTA, which removes penalties for birds killed by wind turbines, reveals he simply doesn’t care.

The Trump Administration’s reinterpretation of the MBTA is already harming conservation. When the Virginia Department of Transportation (VDOT) prepared to expand the Hampton Roads Bridge-Tunnel Complex, they realized it would destroy nesting grounds for about 25,000 colonial shorebirds. To comply with the MBTA, they planned on creating an artificial island nearby where the birds could continue to nest. The USFWS sent a letter to the VDOT stating that, since the MBTA no longer prohibits incidentally killing birds, conservation measures are “strictly voluntary.” Virginia canceled the artificial island project.

The artificial island construction in Virginia is just one of the dozens of avian conservation measures rendered “strictly voluntary” by this reinterpretation. Despite this, some honorable companies have continued to prevent bird deaths, such as a timber company in Michigan that kept a great blue heron rookery standing. But can we seriously expect every company, including ones which lobby against basic pollution controls, to take avian conservation seriously?

Protecting migratory birds requires collaboration across borders, whether they separate different properties, states, or nations. What effects birds in one place can have wider effects throughout the Americas? Even if every company in a flyway works to voluntarily prevent bird deaths, all it takes is one negligent company to ruin everyone’s work. Wherever we are in the Americas, birds connect us. They are a reminder of how the love of nature unites us, and how people, regardless of where they are, can reach across borders to protect the biosphere which sustains us all.

Photo by Jan-Niclas Aberle on Unsplash 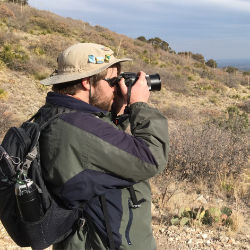