This Land Is Your Land, But Who is You? Atlantic Coast Pipeline Proposes to Cross Appalachian Trail

The Supreme Court is considering the consolidated cases U.S. Forest Service v. Cowpasture River Assn. and Atlantic Coast Pipeline LLC v. Cowpasture River Assn. to determine if the Dominion Energy company’s Atlantic Coast Pipeline for natural gas should be allowed to cross the Appalachian Trail near Charlottesville, Virginia. The Court heard the oral arguments on February 24, 2020. The pipeline would carry natural gas through an area near Charlottesville, Virginia in the George Washington National Forest where it would cross the Trail. The Trail,

administered by the National Park Service runs through land controlled by the US Forestry Service. The question is which federal entity is legally authorized to speak for the Trail, which is on land owned by the federal government?

Does the Forestry Service have the authority to grant right-of-way access to the pipeline company to build across the Trail? The U.S. Court of Appeals in the 4th Circuit said the Trail is part of National Park system lands and is subject to federal law (1920 Mineral Leasing Act) that prohibits private energy extraction including pipelines on those lands. The Court action cancelled a permit that the Forestry Service had issued in December 2018 following approval by the Federal Energy Regulatory Commission in 2017. The pipeline will tunnel through a ridge, below the Trail that runs over the ridge.

The Trump Administration argument, supporting the pipeline, said the Trail sits on top of the land which is indeed part of the National Park system. However, the land beneath the Trail is exempt from that qualification because it is administered by the Forest Service. Judge Sotomeyer said that was not an easy distinction to accept. Judge Alito tried to justify the distinction claiming that a pipeline 600 feet below the Trail was not “on” the Trail.

The Virginia Attorney General filed an amicus brief to support the plaintiffs, the Southern Environmental Law Center, that oppose the pipeline. He argues there is no exceptional reason that this pipeline is needed and that federal law applies, restricting new pipeline access on National Park system land.

The entire 2200 miles of Trail actually runs across private, local, state, and federal lands and, heretofore, decisions have been guided by the laws that pertain to whichever owner of the Trail land is under consideration. The 4th Circuit Court has now ruled that they consider the Trail is part of the National Park Service and, therefore, the land is subject to laws as pertain to the Park Service. This would upend previous land ownership interpretation.

A further complication is that The Appalachian Trail Conservancy is the actual day-to-day manager of the Trail. It is a private group authorized by the National Park Service to work with federal, state, and environmental groups to oversee the Trail. They feel the opponents of the entire pipeline are using the Trail to stop it. The Conservancy actually has detailed guidance on when to oppose a pipeline based on its impact on the Trail. For this Trail crossing, they are staying out of the pipeline fight because they feel the cost of entering the fray exceeds the risk to the Trail.

The 1968 National Trails Act transferred control of the Appalachian Trail to the Secretary of the Interior who designated the National Park Service to be the operator, and by all rights the Trail is part of the National Park system.

The Pipeline lawyers claim that the Trails Act did not transfer the land, only the management of the Trail. Therefore, the Forest Service has jurisdiction over the land and can authorize the permit.

There are hundreds of trails across the country. The question the Supreme Court justices asked, from both the left and the right, is whether the environmental group’s interpretation that the National Park Service controls all trails land, including trails that run through developed areas like Selma, Alabama (National Historic Trail) is correct?

Will this pipeline cross the Appalachian Trail? The legal interpretation of the land jurisdiction and land management of the Trail as part of the Parks Service hangs in the balance of the Supreme Court.

Photo by Kirk Thornton on Unsplash 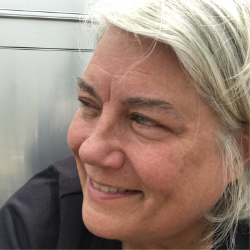 I travel the country in my Airstream meeting people and enjoying life. I’m a writer. I was a Professor of Politics. Things change. I have a...
More Posts by Robyne Stevenson