California is Burning—And It’s Going to Get Worse

California is no stranger to natural wildfires—the state’s mostly dry, windy, and hot climate is the perfect recipe for fires—but in the past few years, climate change has caused warmer temperatures, less snowfall, and severe drought, resulting in longer and more destructive fire seasons. A federal government that doesn’t believe in climate change or that climate change is a direct and immediate threat to the planet can only compound the life-threatening issue at hand.

On October 28, 2019, at 5:30 in the morning, I woke up to a text from work telling me to stay home. My sleep-addled brain didn’t care enough to ask why; all I cared about was that I would have a few extra hours to sleep. Little did I know, there was a nearly 800-acre fire burning just a couple miles south of my workplace in Los Angeles, California, clearly visible from the freeway I took to work every morning. The Getty Fire, as it would later be called, would burn for another five days, destroying 10 homes and damaging 15 others, forcing evacuations, causing power outages to nearby buildings, and turning the hills along the Sepulveda Pass in the Santa Monica Mountains to an ashy, blackened wasteland you could see from miles away and that is still affected nearly five months later.

This wasn’t my first brush with wildfire: just days before, I had clocked out of work in the evening and walked outside to find ash raining from the sky from a fire just a few miles north. In December of 2017, during my senior year in college, the 400-acre Skirball Fire forced the university to cancel classes, and my roommate and I packed evacuation bags and had rides planned in case we had to run. That fire would result in a widely circulated photo depicting drivers commuting to work on the 405 freeway between hills engulfed in flames as well as my roommate’s new topical pickup line (“Are you the Skirball Fire? Because you got me all hot and bothered.”).

Those are just my own experiences with California wildfires. According to the Department of Forestry and Fire Protection, there were over 7,800 wildfires and over 259,000 acres burned in California in 2019; 7,600 fires and almost 2 million acres in 2018; and 9,200 fires and 1.5 million acres in 2017. California is no stranger to natural wildfires—the state’s mostly dry, windy, and hot climate is the perfect recipe for fires—but in the past few years, climate change has caused warmer temperatures, less snowfall, and severe drought, resulting in longer and more destructive fire seasons.

A federal government that doesn’t believe in climate change or that climate change is a direct and immediate threat to the planet can only compound the life-threatening issue at hand. Last May, President Trump appointed to a climate-science panel a physicist who had once compared “the demonization of carbon dioxide” to “the demonization of the poor Jews under Hitler.” In June 2017, President Trump announced the United States would withdraw from the Paris

Agreement, an agreement signed by 200 countries to set goals to limit temperature rises. The U.S. Secretary of State argued that the U.S. had already reduced emissions. Perhaps more dangerous than flat-out denial, officials within the Trump Administration have been pushing language suggesting that climate change is beneficial to agriculture, citing misinformation that a warming environment “may increase plant water use efficiency.”

Although Governor Newsom originally thanked President Trump for approving federal funds to combat four of the biggest California fires of late 2019 (Getty, Tick, Kincade, and Easy), a few days later the President took to Twitter to blame Newsom’s “terrible job of forest management” for the severity of the wildfires.

It should be noted that California has several programs in place to prevent and respond to wildfires. In January of 2019, Governor Newsom proposed an additional $105 million in spending to prevent and fight wildfires in response to the two worst fire seasons California has ever seen. The fires that broke out in late 2019 saw improved response from previous years as well as better preparation; as a result, fewer homes were destroyed and fewer lives were lost.

However, those facts should be irrelevant since the state owns just 3% of its forest land; more than half is federal land and falls under the jurisdiction of the U.S. Forest Service, which has reduced its forest management targets in California twice in the last year.

In contrast to the state’s fire response policies, the President has repeatedly proven that he does not understand wildfire response or prevention, stating that California should “clean” its forest floors, comparing California’s wildfire frequency to that of other states with less dry and windy climates, and threatening to cut federal funds to combat wildfires in the state.

Although 2019’s fire season was significantly less destructive than the previous two years, there is no question that wildfires in California are becoming more commonplace and deadly. 2017 and 2018 were the two worst years for fire in California, and this pattern could have continued if not for increased prevention and response efforts. However, while it is vital we respond appropriately to wildfires and take measures to prevent them from happening in the first place, fighting wildfires is treating a symptom of a much larger problem: climate change. As long as our elected officials continue to deny the existence and consequences of climate change, natural disasters like wildfires will continue to destroy land and displace and kill people and wildlife.

Photo by Dominik Lange on Unsplash 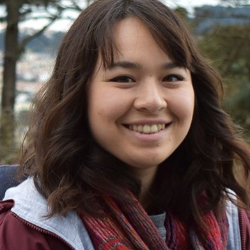 Laura is a museum education coordinator in Los Angeles, CA. Originally from San Francisco, she graduated from UCLA in 2018 where she served...
More Posts by Laura Jue